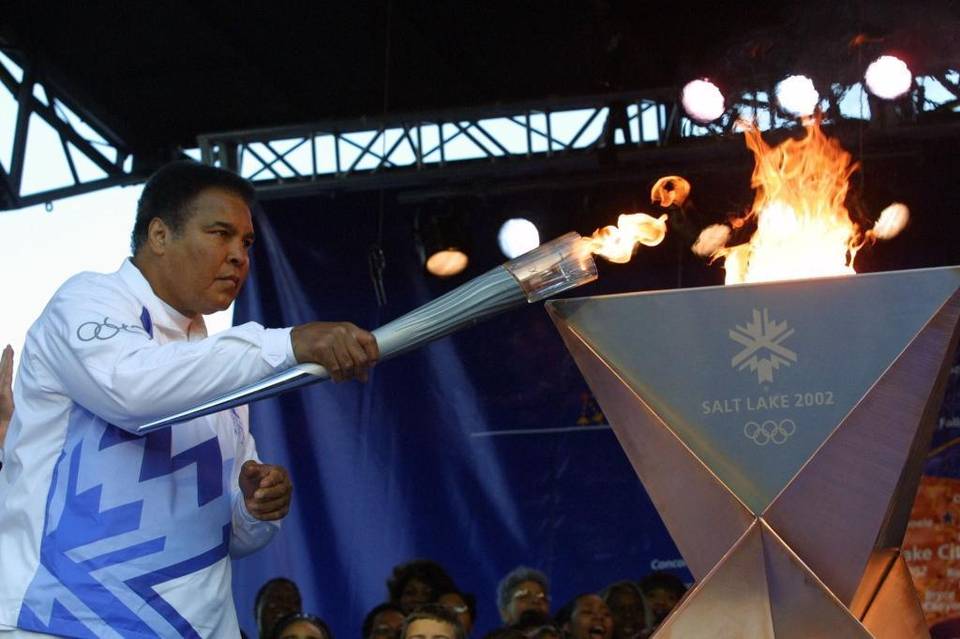 I remember watching Muhammad Ali walk up to light the Olympic Flame.  It took so much concentration and strength for him to make the climb, through the challenge of Parkinson’s disease. I was inspired in that moment.  Today, as I listen to the Eulogies and other speeches honoring Muhammad Ali, I find myself thinking of what fighting means, what struggle means.

First I thought about how every person from a marginalized, oppressed group, particularly people of color, who have become “noted” or “famous” or broken through some barrier to hold high office, hold up a world title belt, hold an academic chair…. how each one have had and have, as long as they live, to fight so hard to get there.  And fight more than the bout in the ring, the campaign for office, the defense of a dissertation … they have to fight through waves of distrust, condescension, verbal discouragement, insult and — so often — laws that bar them. And even once they attain the office, the belt, the chair, the title — it continues.

And I thought about how history and sometimes the news, likes to portray people in such two dimensional ways that you could mistakenly think of Muhammad Ali as a championship boxer and not recognize his positively mythic, heroic, and social dimensions.  When I was around 9 and the young fighter, Ali, declared himself to be “the greatest,” I probably thought that he was cheering for his boxing prowess. Well — he probably was — but, looking back, he was speaking to and for every black person while he had the cameras and lights upon him.  I am the greatest.  Watch a black man be proud, watch a black man, speak his pride so that you can see your own.  The sort of declaration you’d want your child to witness so they would know that they, too, were cut from the same cloth as greatness.

I wrote that and tuned back into the memorial, compliments of DVR.  Valerie Jarrett, then,  shared the story of one of Ali’s last fights when the odds were against him and he did lose.  And someone asked the restroom attendant who he’d put his money on, and the man answered, “Muhammad Ali!” When asked why he’d bet on the old fighter, the man replied, “I’m 72 years old and Muhammad Ali gave me my dignity.” I know that was what Ali meant when he said “I am the greatest.”

As I watch his memorial, which he planned, I am heartened by the strength and courage of so many people who are gathered there — generations of activists who have kept vivid and viable the promise of a noble and true America.  No matter the idiot voices and reckless power — there are countless people in tireless generations who rise again and again to remind us of our better selves, call us to those selves, call us beyond “cultured despair” (as the Unitarian Universalist theologian Sharon Welch called it) or selfish comfort or even fear.

And I am breathless with witnessing the interfaith beauty of the service.  I want to lay flowers somewhere in his honor for the celebration of the world’s faiths that he has left behind him.

“I am the greatest!” makes me think about all the damned debate about Black Lives Matter — what about “all lives”… blah blah blah… and that Muhammad Ali knew that sometimes you do have to lift one group, affirm that group, an oppressed group.  It’s just as you love one of your children or a dear friend especially hard when their hope or confidence is failing — not to the exclusion of your other children or a dear friend– their turn will come.   And I know that those who seek affirmation — from different groups, other oppressed groups — those who seek affirmation and not domination — always find and hear their own affirmation when any one from any oppressed group sees through the filth and lies of bigotry to their own inherent worth and dignity.

I heard him say

And I knew he was giving homage to Langston Hughes from one of my favorite poems:

The memorial is giving me a sense of hope and a reminder of beauty that I think I sorely needed. Perhaps it will give more people a stronger understanding of the reality and range of Islam, of the beauty of people who have faith in human dignity, and of the need for risk and even sacrifice to create the America so many generations have dreamt of.

It is an America I grew up believing in and working for.

Thank you, Muhammad Ali! You will rest in peace and endure in glory.