Even as a child, I felt protective of … well … everything. In retrospect, and thinking about how I wrote it that way, it sounds quite co-dependent. But I was and am convinced that a heart-felt concern for all life is simply a sign of being awake to life — and to lives other than one’s own, one’s family, one’s species.  Being awake like that often cost me a good night’s sleep — as I lay in bed anxious and feeling the sufferings of beings far and near, living and long gone.  Some might call it being “thin-skinned.” To which I would say “better a thin skin than a suit of armor.” Or they might say the usual “bleeding heart.” To which I would most emphatically respond, “better a bleeding heart than none at all!”  I learned the habit of insomnia quite early and honestly.

Since the onset of the pandemic (and why couldn’t that be an overabundance of pandas?) I have experienced episodes of insomnia — like many millions of people throughout the world.  But also, I have experienced terrible brooding and anxiety — the like of which I have not seen in many a year. It is not, primarily, about my own life and well-being (though I do not want to experience the vagaries of this virus) — but about the spread of the virus, the numbers of those sick and suffering, all those who die, all the lives torn by death, and all the lives upended and made tragic by loss of stability, income, home, the illusion of living in a leader among nations. And my own anger and frustration at the lack of compassion, patriotic kinship, and leadership. So, I’ve been awake at night, at times. Brooding.

Of course, one can’t thrive like that. So I’ve developed many coping mechanisms.  Work,  of course, is the primary one. It gives me a sense of purpose and service. I am so grateful for being able to serve a community — and a community with the desire to serve others and not to narrow their definition of who “their own” is.

The other thing that I have been powerfully drawn to is the fauna around our apartment building. The three retention ponds in the center of the complex have attracted beautiful birds. I admit that I have been obsessed with the geese. But, before I get too carried away by the geese — I will defend myself by also mentioning that I have been enchanted by the cormorants who have regularly visited our ponds. Diving — and swimming many feet underwater.  Then, regally stretching and airing their wings. Fabulous. Glorious black waterfowl. And the herons — never have I been so close to a heron.  Full disclosure — there is certainly a chance that these birds have been snowy egrets and that there was one great white heron as well as a series of smaller snowy egrets. Even reading about them I am confused. But they are a pleasure to watch and the way that they take flight is so large and dramatic that it offers a sort of kindred sensation of flight in the heart.  A Great Blue Heron has visited here a few times and been a source of awe.  They, too, take flight with a slow grace that astonishes.

But the geese. For years I have called them Siamese birds on account of their seal point coloring.  I have always loved them — despite their prodigious production of poop.  They are beautiful and strong and proud. And a little funny, as well.  They cause me to stop while driving, pull over, and sit and watch. They make me cry out — “goose!” — aloud — alone or with others — as a nearly pure reflex. I have, at times with other people, been able to simply exclaim without using the word — but I have no record of being able to entirely quash the exclamation of delight and excitement. So, when we moved into the apartments and found geese right outside the window, it was a great gift. And the immediate reflex of delight tugs me out of my brooding and obsessing. They summon joy.

I watched with anxious attention as a goose nested.  Then they vanished and a week later a seemingly new collection of geese appeared — 5 whom I began to call the “bachelors.” And a massive family of two adult geese and fourteen goslings.  Joy abounded. I could hardly wait to get up in the morning and see where they were, if they were all still well, how big they had grown, what the fluff they were doing.

They scuttled and then teetered around. The parents were outstanding — vigilant, protective. One day, as the big mowers were out around the ponds, they all sauntered up onto our small patio.  Mid-sized fuzzy waddlers with stumpy little wings and sweet, dark eyes.  They were inches away from me. I did not take a moment to grab a phone to take a picture for fear of losing them. And then they all vanished.  It was that day. Right after the big mowers came out.  Had the noise disturbed them? Were they safe? Were they together?  I brooded over the geese.

And then, this morning, on his morning walk, Mark found them. They had moved a  few blocks away to a retention pond in an upscale neighborhood.  Private homes, fewer people, probably way fewer dogs.  While I will miss them,  I felt immediate relief that they had moved to more sheltered digs.  I’ll never see them finish growing their wings — but I know they are out there — with those fabulous parents. 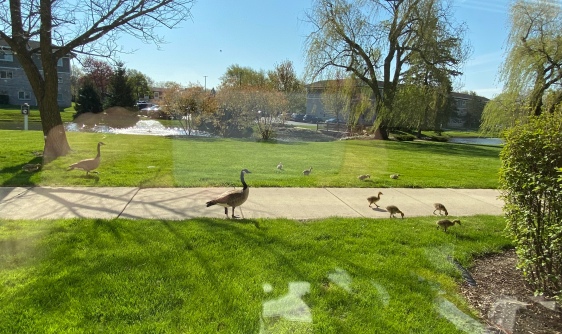 Still, I felt curious about how two geese ended up with 14 goslings. So I looked it up. It turns out that each goose lays up to 8 eggs at a time — forming a brood! A brood! What a discovery.  Obviously, I am a  city girl. Otherwise, I would have remembered that they were called a brood. After they have their brood, they often join with other goose families to  form what is called a creche — a co-parenting unit — hence, fourteen youngsters.

The brooding geese have been the greatest medicine for my own brooding. Loving their thriving, fuzzy hatchlings, took my heart away from the ache over all the people who are not thriving. Watching the ongoingness of life — has been healing for me. 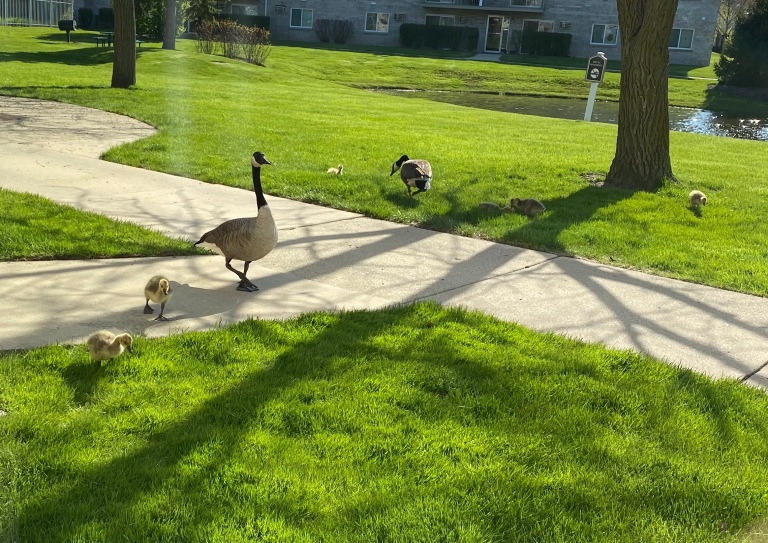 When we emerge — someday, carefully, somehow, from our pods and pockets of careful shelter — I hope that we will remember that the rest of nature flourished with our social distance and that we can build socially safe distance and care into our relationship with the world so that all life can flourish in the future.

Maybe, if more people brooded over the value of life, like geese brooding over their young — it would be a world where we could all sleep better at night.